Better by design
The TASKI AERO tub vacuum cleaner from Diversey is believed to be the quietest and most energy-efficient machine currently available to the professional cleaning market. The four models in the range produce only 66dB(A) of sound and utilise just 585W of electrical power yet produce as much cleaning suction as machines rated at 1000W or more. In “eco” mode these same machines produce just 63dB(A) and consume a mere 300W. On energy savings alone, these machines can pay for themselves in less than three years.

The drive for lower energy consumption
The range was conceived by TASKI in response to market demands and to meet the stringent vacuum cleaner sound and energy level requirements covered by EU Regulations. These rules, which came into force in September 2017, restrict vacuums manufactured or sold in the EU to a maximum 900W power rating and maximum 80dB(A) sound level, and set additional standards for labelling and performance.

Faced with need to produce a new model to meet the incoming standard, the engineering team at TASKI responded with a revolutionary design that went further than was strictly necessary. The design is based on reliable, tried and trusted technologies and utilises rugged components to ensure ling-long reliability and performance.

Most people recognise that more suction leads to more dirt and debris being picked up. In practice, suction is dictated by the amount of air passing up through the cleaning head. One of the popular myths about vacuum cleaners is that more power means better cleaning efficiency. The reality is that many manufacturers have retained designs and technology that are decades old and for these it is usually true that more powerful machines tend to offer better performance. 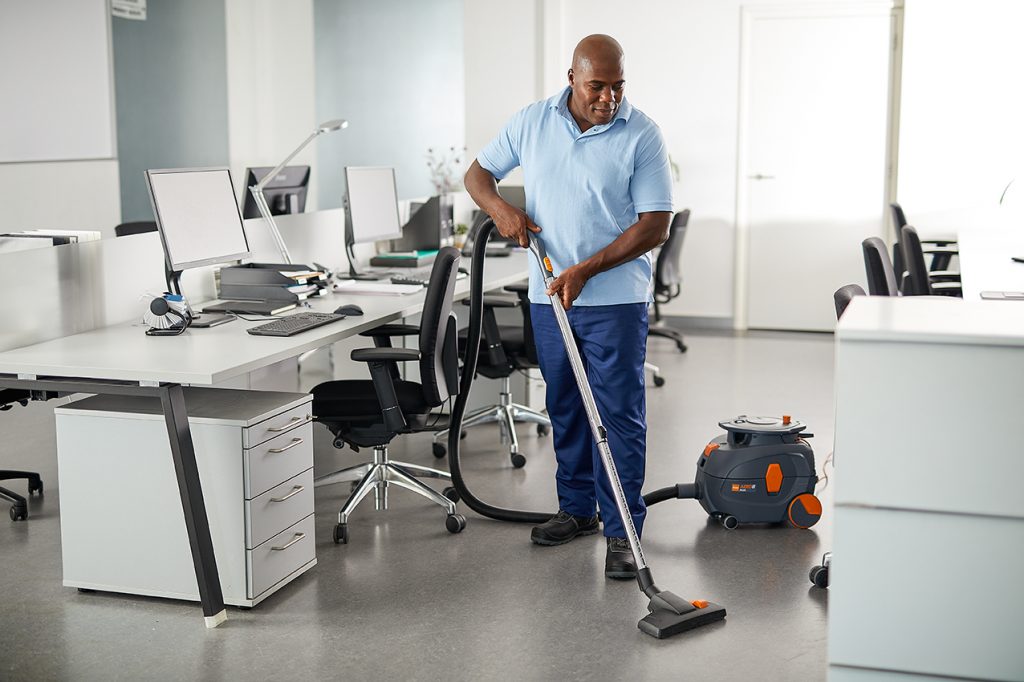 The engineering team at TASKI took a different view. They reasoned that by looking at every aspect of the design they could make a vacuum with better suction while being more efficient. Their initial objective was to maximise airflow at the cleaning head while simultaneously minimising noise and energy consumption.

By optimising the internal airways, they eliminated bottlenecks and sharp corners so that more of the electric motor’s power is used for suction at the cleaning head rather than simply moving air past obstructions inside the machine. Another consequence of the air moving more freely and efficiently is that it produces less noise.

These changes would in themselves ensure any given power of motor produces more suction. But the designers went further by looking at all the points where air could leak. Air lost internally not only decreases suction efficiency but also creates noise (much like a draughty window does). Designing better seals between the various components helped to eliminate leakage points.

The designers also looked at the fans and vanes that generate the airflow. By redesigning these components, they increased efficiency significantly so that more electrical energy is turned into useful airflow and suction.

Since then the EU has rescinded these regulations but the legacy from TASKI is still one of the most efficient and quiet vacuums on sale today.

Many of these changes have been patented by TASKI and the company has called this novel design “Whisper Technology”.

Check out our vacuums & Innovation pages

Want to
find out
more

SOLUTIONS
FOR YOUR
INDUSTRY

Want to
get in
touch